Dear Fox News weekend Fox and Friends, you lost many viewers after “The Specialists” debacle. People are tired of the so-called Fair and Balanced liberal morons hired to be fair and balanced. They’re not. Twenty years from now, Juan Williams will still be making faces and saying, “Oh, I see. Oh I see…,” and otherwise spinning the facts presented to him. And Geraldo, will always be claiming to be a Republican. Marie Harf and Jessica Tarlov will continue to prove that Democrat presidents, and first ladies, sure know how to find and hire geniuses.

But when, as happened this morning, the female host begins attacking a guest and not allowing him to speak, maybe it’s time to rethink your Rules of Engagement. Or, maybe rethink your decisions about who to put on your most popular segments.

Eboni Williams always spoke fast and out of both sides of her mouth on The Specialists. This morning she spoke only out of one side, the only side she truly cares about. And, she tried to intimidate a great man who cannot be intimidated – Sheriff David Clarke.

I’m still stunned by what I saw and heard. She should have been fired on the set during the next commercial break.

The weekend FNC always turns into a soft-porn version of MSNBC. Please don’t let Eboni ever sit between Doocy and Kilmeade during the week. I’m already down to Bret Baier-and-later shows. 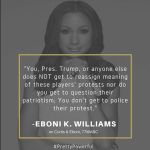